The Alamillo Bridge, designed by the architect Santiago Calatrava is in Seville, Andalusia.

The bridge was constructed to provide access to the Isla de la Cartuja, where Expo 92 was held. Here we may currently find the Isla Mágica park and the Cartuja Monastery from which the name of the Island derives.

The Alamillo Bridge does not have any retaining stay cables, which makes it the first stayed bridge without stay cables that receive the forces from one side of the tower with other stay cables on the other side.

The operating principle is that of a balance for which equilibrium is achieved by the 140-metre high pylon collapse mode at a 48º angle with the horizontal. The pylon foundation consists of fifty-four 2-metre diameter piles that are 48 metres long.

The deck is formed by a hexagonal central metal caisson, 3.40 metres edge height and variable width, containing the laterally-embedded ribs that support the reinforced concrete slab that forms the two 3-lane roadways for the bridge. Pedestrian traffic is via the central reservation on the central caisson.

Thanks to this project carried out by FCC, the basin was crossed without any form of intermediate support, the right bank was integrated into Seville and a large surface area of water was produced without any obstacles, attaining a 200-metre span that enters the technical domain of cable-stayed bridges.

The mast to which the stay cables are anchored is a composite concrete and steel structure. The transversal section is variable with a circular four-metre diameter up to elevation 76. Mast inclination permits stay-cable balance without using retention cables. 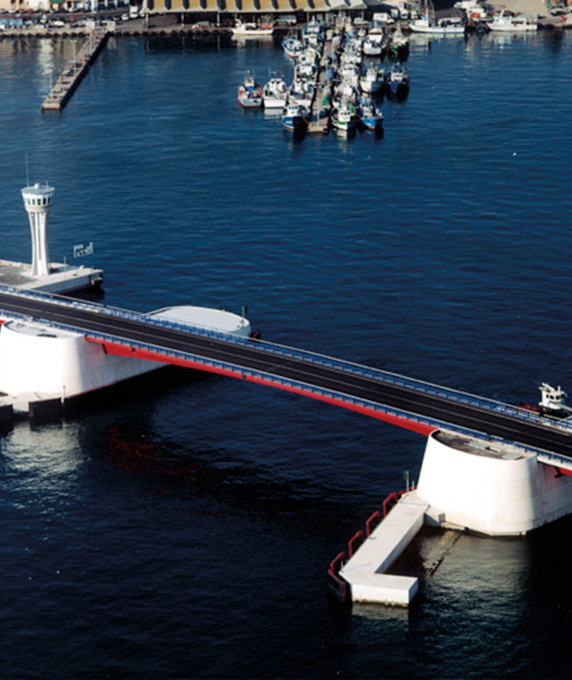 There are two concrete viaducts 67 meters wide, and 1,444 meters and 1,176 meters long respectively. 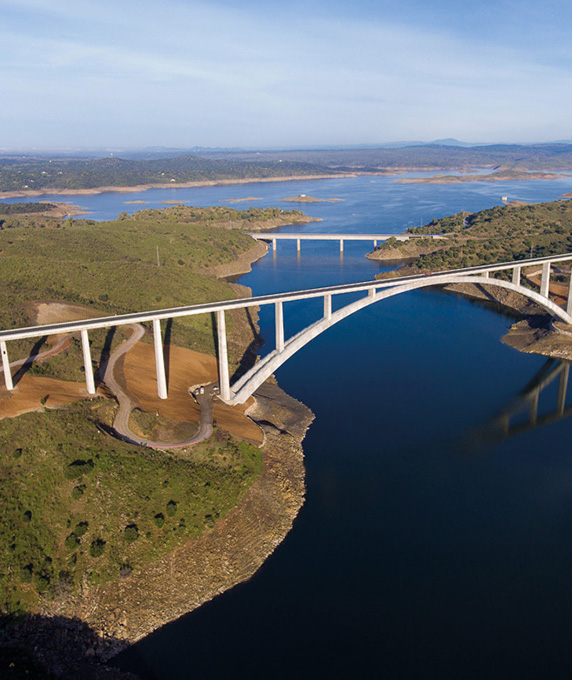 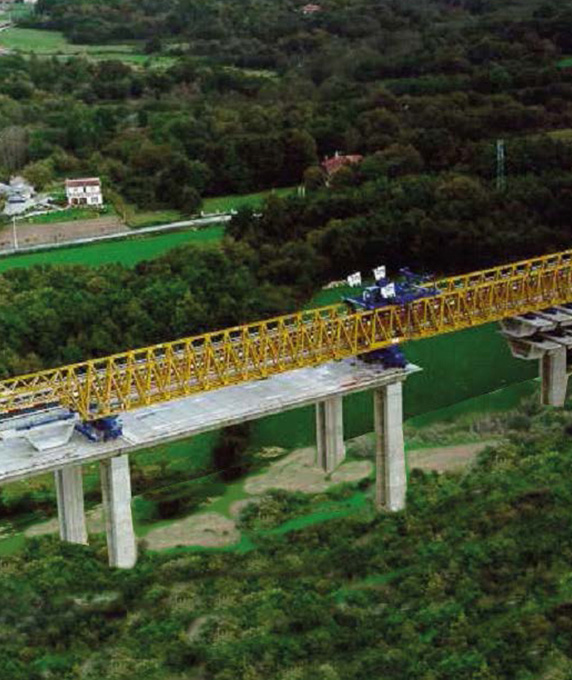 These viaducts are located on the Rías Bajas highway (Galicia), on the stretch San Ciprián de Viñas - Alto de Allariz. The sections are erected isostatically to bridge to construct the 45 meters spans with 16prefabricated, pre-stressed segments.

The Arnoi and Valenzana viaducts are 945 meters and 450 meters long respectively.

The Azud de l´Or Bridge takes its name from this historical hydraulic network in the city, which raises the water level and channels the ditches for allotment irrigation and connects the north and south limits of the old course of the River Turia in the City of Valencia, Spain.

It was designed by Santiago Calatrava and constructed by FCC with this great work becoming the longest and highest bridge in Valencia.

Its lightweight structure and technical elegance provide it with unequalled aesthetic qualities, forming a harmonic assembly that is fully integrated into the architectonic environment of the “Ciudad de las Artes y las Ciencias” (City of the Arts and Sciences).

This cable stayed bridge has a metal structure that weighs 5,500 tonnes and is 280 metres long with a 125-metre high pylon from which 29 front cables are suspended in a harp form, together with four rear cable-tube retention assemblies The bridge is 39 metres wide. It has three lanes in each direction and an average traffic of 70,000 vehicles a day.

Furthermore, it is already prepared for a future tramway with a specific 3.5-metre lane. There is a pedestrian platform in the centre and a bicycle lane.

The metal deck is suspended from a series of cable stays anchored to a pylon. This consists of a central metal spine that follows the roadway path.

Regarding lighting, the view of the City of the Arts and Sciences is not disturbed.

The construction of this infrastructure opens one of the most important routes in Valencia City, breaks up the horizontality of the City of the Arts and Sciences and connects the Oceanogràfic, Ágora, Umbracle, Museo de las Ciencias, Hemisfèric and the Palau de les Arts Reina Sofia.

An emblem of Bucharest

An emblem of Bucharest

The Basarab Viaduct is located in the northwest of Bucharest, an area of greatest traffic flows and high concentration of commercial and residential buildings.

This infrastructure has four parts, the Grozavesti Viaduct, the 120-metre long arched bridge that crosses the River Damvobita, the Orchidea Viaduct and the cable-stayed bridge over the railway marshalling yard and which has an access station to the metro.

This elevated structure, is 1,950 metres long and assists the traffic flow and the passage of the main tramway arteries of Bucharest. It has a station on the braced section of the viaduct, with access to the metro lines and platforms of the Gara du Nord.

This elevated structure has a length of 1,950 meters and helps to facilitate traffic and the passage of the main tram arteries of the capital. It has a station on the cable-stayed section of the viaduct with access to the metro and the Gara du Nord platforms.

This 365-metre long cable-stayed bridge is supported on two 80-metre high pylons, each one having 30 symmetrically placed cables on each side of the pylons.

The arch bridge over the River Dambovita is 124 metres long and its pylons are supported on footings on top of 40-metre deep columns. The arches have a 180-metre front.

Between the two bridges, unique structures in Romania, the highway and tramway traffic operates along a 1,500-metre long pre-stressed concrete viaduct, including the access ramps that employed an innovating tensioning method.

The Basarab Bridge connects the north and south of Bucharest and facilitates the traffic in the area, thus completing the main movement ring road in the northwest of the city.

awarded for the innovating technologies employed in pre-stressing and cable-stays.

The construction helps alleviate traffic and facilitates passage of the main tram arteries from the capital.

Bridges and access ramps include an advanced seismic protection system, applied here for the first time in Romania.

One of the largest projects carried out in Romania in the last twenty years.

The bridge is 1,950 metres long and at the same time, is a work of art that gained two European records. one for being the widest cable-stayed bridge in Europe at 44 metres and the other for being the only bridge on continental Europe with a tramway station, with a ground-level entrance that guarantees connections with public transport, metro and railway.

Because of its construction, the Basarab Bridge becomes the largest intermodal point in Romania, joining tramway lines on the surface and below it, trolleybus lines, metro lines, two railway stations, as well as bus stations for national and international transport. 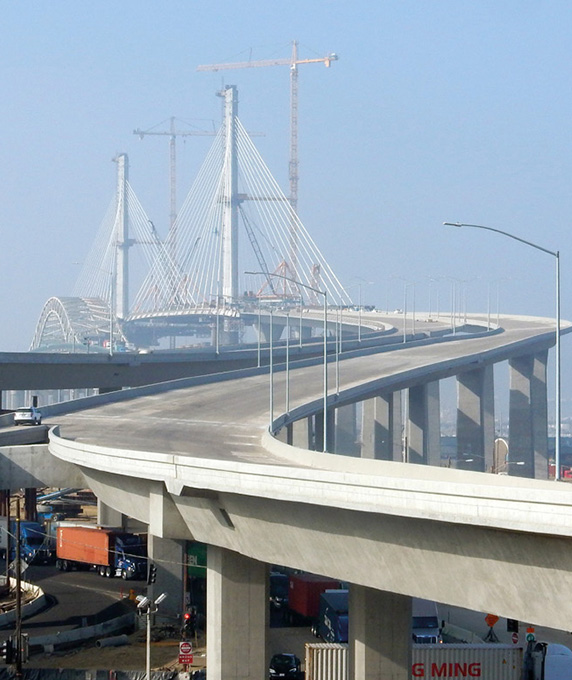 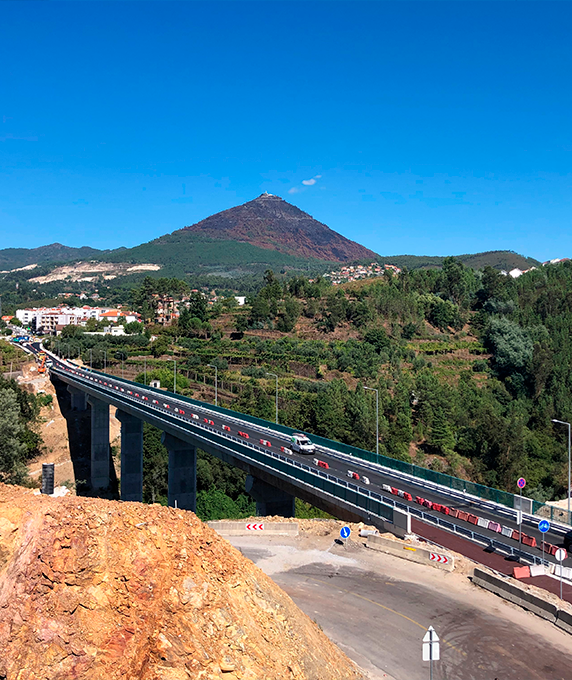