This contract involves designing, building, financing, operating and maintaining a new prison complex for 25 years in Haren, a municipality in the City of Brussels. It is located near Zaventem airport, the Vilvoorde viaduct and the future shopping centre Uplace in Machelen.

Construction of the Haren prison consists of 108,000 built up square metres on a surface area of 15 hectares, for 1,190 prisoners and 1,000 administrative employees. The perimeter security wall is over 1,200 metres long.

The prison will have fourteen units: two prisons for convicted offenders, six male prisons for arrestees, two female ones, both open and closed, one for young offenders, one for psychiatry and one prison hospital. It also includes an entrance complex, a main building with a visitors' area, hearings area, a detainee settlement complex, a national transfer complex and a sports area. Other service buildings will include a control and intervention area, an area for security forces, a workshop area for the inmates, a logistics area, administration areas, as well as car parks for employees and visitors.

The building typology is common for this type of building: pile foundations, walls and reinforced concrete structure, facades and typical roofing. The high levels of safety required in terms of fires, safe use and integral accessibility must be taken into account.

Haren is the first concessions project won by FCC in Belgium. It joins the list of many other national and international projects carried out within the social and health care sector, including hospitals and courts. 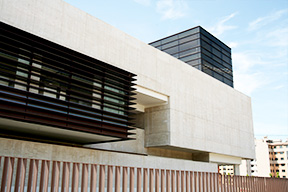 The building is for retransmissions during the London 2012 Olympic Games

The building is for retransmissions during the London 2012 Olympic Games

The International Broadcast Centre was constructed as the media headquarters for the retransmission of the London 2012 Olympic Games.

The contract for this prestigious project included the design, equipment, maintenance and dismantling of the interior architecture and electrical and mechanical installations for the 55,000 square metres of the International Communications Centre.

The complex also has 8,000 square metres of office space.

It is a spectacular complex that received more than 22,000 accredited journalists representing the almost 660 media that travelled to the United Kingdom specifically to cover the Olympic Games and provide full details of London 2012 to an estimated audience of almost four billion people. 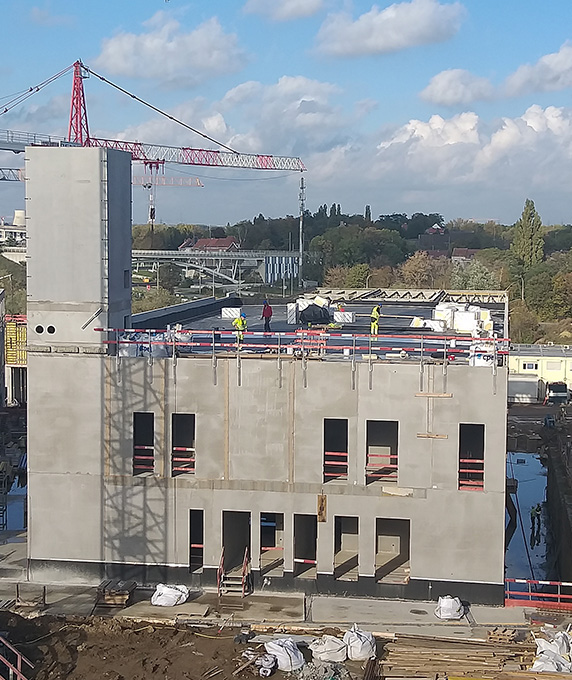 The new Regional Parliament of Castile and Leon is located in the development plot "Villa de Prado" in the city of Valladolid. Its main facade looks out onto the Avenida de Salamanca, a main artery of the city which leads to the south. The new square, called the Plaza de las Cortes, faces the southern facade of the building. The rear façade, which faces west, and the side façade, which faces north, both look out onto the town of Villa de Prado.

The new Regional Parliament building contains a basement and five floors, with two distinct parts: the institutional part with the chamber, and the administrative part where the auxiliary services to the chamber can be found. The building is made up of four structures and has a gross floor area of approximately 30,000 square metres.

The first structure, with a rectangular floor, consists of the ground, first and second floors. The visible part of the facade is made of white concrete and is 175 m long and 49.5 m wide. This structure has an open lattice on its western facade where the new office spaces are located.  There is a large space on the southern facade coming from the Reception Room and the Office of the Presidency. On the eastern facade, below the Chamber, there is an open space stretching right up to the first floor, thereby enabling light to enter the entrance area of the plenary room. This structure reaches a height of 14.60 m.

The second structure consists of the library which, with its horizontal aluminium and glass protective bars, opens out onto the inclined plane of grass that impairs the view from the Avenida de Salamanca.

The third structure consists of the Chamber, which has a 27.8 x 28 m floor and is 13.3 m above the roof of the main structure. Its external facade was designed on screen-printed glass using digitalised alabaster images, which the architects portrayed with colour and volume, thereby providing a warmer image and one that contrasts with the white concrete without imitating the finish of the stone. The light enters the interior through a second alabaster skin and filters into the Chamber where the fine woods stand out. The effects of the light shining through are both refreshing and surprising and lead to a changing urban landscape of the Avenida de Salamanca by day and night.

The fourth structure is the glass structure with a two-floor curtain wall starting at the roof foundations - crystal twinning also occurs in the patios. The structure is 150 m long and 10 m wide with aluminium sections that are burgundy brown and where the light-brown glass really draws attention to the size of the structure.

As established in the original design, the concrete roof foundations became the fifth facade with a unique intertwining of terraces and patios. This is where the light enters the building.

Restoration of the Palace of Fuensalida in Toledo

Restoration of the Palace of Fuensalida in Toledo

The Palace of Fuensalida, built in the 15th century at the request of Pedro López de Ayala, is the finest palatial example of Mudejar architecture from Toledo. With a blend of Gothic, Plateresque and Mudejar styles this type of historical architecture is scarce in Spanish heritage.

It is a building that is brimming with history. The palace stands in the Plaza del Conde in Toledo, between the Church of Santo Tomé and the Taller del Moro. Many illustrious historical figures lived within its walls, including Isabella of Portugal, wife of the Holy Roman Emperor, Charles V. The palace now houses the offices of the President of the Regional Government of Castile-La Mancha.

The refurbishment of the building consisted of restoring the palace's cultural values, correcting certain structural issues and making the building fit for its different purposes.

Built using bricks, masonry, wood and plaster, the palace is arranged around a rectangular central Mudejar courtyard and has two levels plus a basement. The project included dismantling and rebuilding the roofs, reinforcing the palace's frames, several outer walls and also some of the foundations in order to improve the building's stability.

Moreover, restoration works were carried out on existing features of great historic architectural value, such as coffered ceilings, ironwork, gates and plasterwork. Some spaces were also remodelled for use as offices and meeting rooms, which were then fully equipped with the necessary installations.

Over the course of the project, significant work proved necessary when refurbishing the carved wooden ceilings and plasterwork whose polychrome decoration and importance were left undiscovered at first due to the building's condition. In addition, the basement of the building, which was previously a restaurant, was incorporated into the palace for security reasons after undergoing major restoration works.

The General Archive of Simancas

The Archive of Simancas was initiated by Carlos V of Spain, although it was his son Philip II who ordered the construction of a building and enacted the necessary laws. In 1572 he ordered Juan de Herrera, one of Spain’s leading 16th century architects, to draw up designs of what was to become the first building in the modern era to be constructed as an archive.

In 1588 Philip II signed a document considered to be the first ever regulations for archives in the world. From that moment, the Archive of Simancas began to receive regular shipments of documents from the central authorities of the Spanish monarchy: the councils during the times of the Hapsburgs (16th and 17th centuries) and the secretariats in the era of the Bourbons (18th century), although there were some exceptions. The archive's service to government administration ended in 1844 when, with the arrival of the liberal regime, Simancas was opened up to historical investigation. As of that date, it became a Historical Archive. This exceptional historical path has turned the Archive of Simancas into one of the most important archives in the world.

The refurbishment of the building aimed to integrate the current archive media (digital) alongside the traditional ones. The latter add both a priceless formal and documentary value.

The first phase of the refurbishment consisted of installing new document storage facilities in the main building, whilst the second phase focussed on the rest of the Archive. The purpose of this was to join together various activities including: management and administration, research and work rooms, rest and visitors' areas. All of this enables a greater number of researchers to be assisted, provides extended areas for archiving tasks, as well as infrastructure that could be adapted to new technologies.

The main work consisted of rehabilitating and restructuring the Archive, adapting the Paseo de Ronda and landscaping the moat surrounding the building. This included work on the research rooms and the administration and management areas, and preparing the attics in the building for use.

The existing beam-and-block structure was replaced with a laminate wood roof in order to fill the attic level with work areas. The floors were completely changed with all of the infrastructure integrated so that civil servants or researchers in the Archive could work across the premises. All necessary carpentry work was done including restoring parts with historical value, as well as extending the traditional stucco in the plastered areas. The surface area of the stucco is around 10,000 m2.

A new administrative building was constructed in the area outside the moat, named Promotion and Dissemination, which provides a new use for the levelled area opposite the Archive. The building now makes use of a current, accessible and open space to encompass all of the activities that take place. This is also where the majority of climate control elements are centralised.

The construction was carried out using a structure made of slabs on white concrete walls. This culminates in a flat trafficable roof in the level entrance area to the Historical Building, and a laminate wood structure finished with aluminium sheets in the administrative area, a small look-out point in the moat area, as well as an exterior technical area under ground level. The facade is coated in Campaspero limestone on the front of the building, reconstructing the pre-existing ashlar wall on the back which forms part of the moat.

In total, there is approximately 2,000 m2 of floor area allocated to exhibitions, conferences, installations and administration.