The 5-star Hotel W in Barcelona, designed by the prestigious architect Ricardo Bofill and more popularly known as the Sail Hotel because of its shape, was opened in October 2009.

The building is a reference in the hotel industry because of its location next to the new mouth to the Port of Barcelona and on a plot of land gained from the sea, because of its creative, innovating design inspired in a ship sail and its installations.

It has a constructed surface of almost 50,000 square metres, distributed over a lower ground floor plus 26 floors of guest rooms, meeting rooms, assembly halls, cafeterias, author's cuisine restaurants, Sky Bar, gymnasium, swimming pools and various other installations all under the platform of more than 6,200 transitable square metres.

Geometrically it is made up of four easily-recognisable elements.

The Hotel is included within a complex of over 64,000 square metres of urban development that reorganises the surroundings and connects it to the marine promenade coming from the Barcelona Olympic Port.

The top prize in the 2010 Prix Villégiature

for the Best Exterior Hotel Architecture in Europe 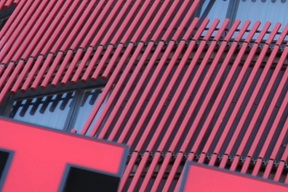 A design based on the old Venetian towers

A design based on the old Venetian towers

Together with the Realia Tower in Barcelona, the Porta Fira Hotel is a skyscraper located in the Plaza de Europa in the Hospitalet de Llobregat Municipality in the Province of Barcelona. They are strategically positioned and form the entrance gateway to L´Hospitalet from the El Prat Airport.

The Torres Porta Fira Project is a complex of 80,110 constructed square metres consisting of two 117-metre high towers, which make them the highest skyscrapers in the municipality and the fifth highest in the Barcelona metropolitan area. One tower is intended to be a hotel and the other for office use.

The Santos Porta Fira Hotel was designed by Toyo Ito and the b720 Arquitectos studio, lead by Fermín Vázquez and has a total constructed surface area of 34,688 square metres, distributed over 26 floors.

The Santos Porta Fira Hotel design is based on the organic form of the lotus flower and has a certain similarity to a tree trunk which was often the case in some of the works of the famous architect Gaudi.

It possesses different forms depending on from where it is observed and it is characterised by its exterior finish of an intense red aluminium pipe latticework. The relationship between hinge joints, aluminium piping and structure mean that the project is adapting in a continuous, regulated fashion throughout the façade, expressing rotation, translation and growth as height is gained.

The façade consists of a double skin, in which the interior wall is made up of a sealed enclosure by means of a curtain wall system, whereas the exterior wall employs independent red aluminium pipes that adapt to the tower geometry.

The second tower has a constructed surface area of 45,420 square metres and is intended to be used as offices. It has orthogonal geometry. It is a volume incorporating a subtly offset glass curtain wall, the vertical red core of which has an organic form and becomes a reflection of the hotel tower.

The tower complex is complemented by a commercial zone located at street level on the office tower ground floor.

for the best skyscraper in the world